As a nation we're still very much in love with our cars. There are 27 million private cars on the roads of Great Britain and we make some 25 billion car journeys every year. With many of our journeys requiring a parking space at the beginning and the end, there is inevitably an increasing need for car parks.

At present, it's estimated that there are between 17,000 and 20,000 non-residential car parks in Great Britain, including those run by councils, commercial parking companies, shops, hospitals, businesses, railway stations and airports. Between them they provide between three and four million spaces.

Only 8% of car parks are above ground level, such as multi-storeys, meaning the vast majority are at ground level and so at risk of flooding and ground water retention.

Since flooding continues to be an increasing problem for our island nation, the issue of flooding in our car parks will require new solutions to ensure demand for parking spaces continues to be met. 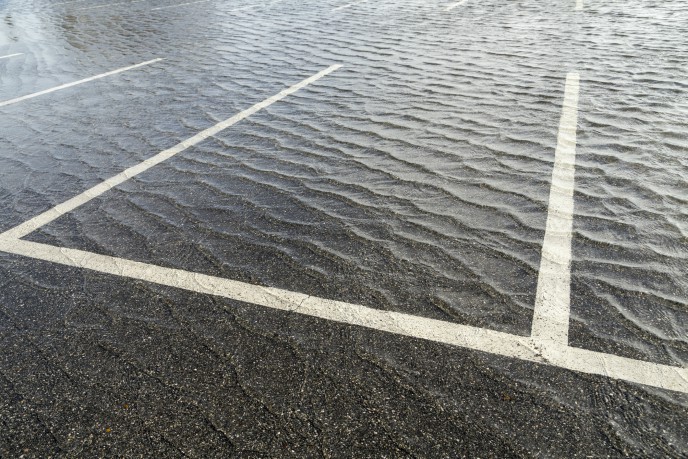 Last November, residents in the Shropshire town of Shrewsbury complained after their car park once again became flooded, preventing them from accessing their cars. One resident said it happened every time there was heavy rain and called on the local authority to clear the drains to prevent the problem recurring.

In another incident, also during November's period of heavy rainfall, residents of flood-hit Market Harborough in Leicestershire, branded the regular flooding of a car park 'unacceptable' and called on the car park operator to find a long-term solution to the problem.

Our ageing network of storm drains and intense building work, which has led to the paving over of natural ground, means flooding incidents are inevitable. Yet there is a simple method of reducing flooding in car parks and other paved areas.

Permeable paving is increasingly being used in new building work and by local authorities governing areas vulnerable to flooding.

The permeable paving system works by enabling rain and flood water to pass through the surface of the paving into the soil below. It can also trap solid waste, such as car oil and farm chemicals, filtering these pollutants from the stormwater. The aim is to control excess water at the source, reducing run-off and improving water quality by filtering pollutants in the subsurface layers.

For low-speed traffic areas, such as car parks, an infiltratable concrete block paver system is usually chosen. These enable water to pass through non-porous permeable paving via gaps between the blocks or flags.

The basic structure of permeable paving is similar to standard block paving. The underlying ground, or sub-grade, is prepared, a sub-base is laid, then a laying course consisting of grit and finally the blocks themselves. Geo-textiles are incorporated into the structure.

Geotextiles work by imitating natural drainage, allowing rainwater to soak away from the surface where it falls. Unlike traditional pipe drainage, geotextiles don't get overloaded during heavy and prolonged downpours.

The geotextiles we supply require no specialist tools or training to install meaning less time is needed on excavation to lay them, making them the ideal solution when working in urban environments.

A wide range of permeable paving is also available, providing an attractive solution to paving susceptible to flooding.

A recent report suggested that the UK is expected to see a rise of around 10% in annual average rainfall by the year 2100 compared to the period from 1985 to 2005.

Heavier rainfall plus a rise in sea levels – which makes storm surges bigger and more likely to breach coastal defences – has led scientists to warn of a greater risk of flooding in the UK as our climate warms.

One study predicts warming of 3.5 to 4.8 degrees C by the 2080s, which would expose an additional 250,000 to 400,000 people in Europe to river flooding, and potentially up to 5.5 million per year to coastal flooding. The UK is likely to be one of the worst affected locations, the report suggests.

Another study projects the average amount insurers pay out annually for flood damage in the UK to go up eight per cent for two degrees warming and 14 per cent for four degrees, which looks likely by around 2060, according to the UN Intergovernmental Panel on Climate Change.

It seems clear that our Government will need to prioritise innovations in flood water management. Permeable paving is established as a successful measure in dealing with surface water and it could play a huge role in future planning of urban paved areas such as car parks.

Scott Parnell specialises in the supply of groundworks and civil engineering products and services to customers across the UK. Independently owned and run, the company has five offices across the south of England and Wales with a team of highly experienced staff offering expert advice to customers. Scott Parnell prides itself on its innovative and pioneering approach to delivering high quality products from a variety of manufacturers – not just market leaders.